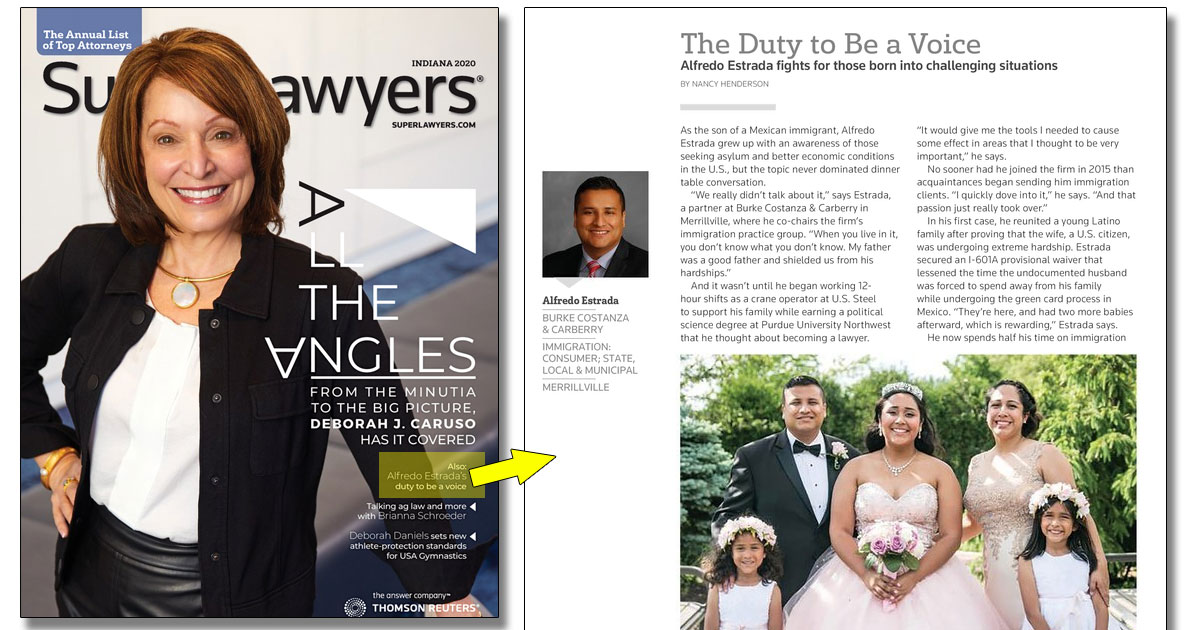 Alfredo Estrada was featured in the Indiana 2020 Edition of Super Lawyers Magazine. View “The Duty to Be a Voice” in the magazine. The article is quoted below for your benefit.

The Duty to Be a Voice

Alfredo Estrada fights for those born into challenging situations

As the son of a Mexican immigrant, Alfredo Estrada grew up with an awareness of those seeking asylum and better economic conditions in the U.S., but the topic never dominated dinner table conversation.

“We really didn’t talk about it,” says Estrada, a partner at Burke Costanza & Carberry in Merrillville, where he co-chairs the firm’s immigration practice group. “When you live in it, you don’t know what you don’t know. My father was a good father and shielded us from his hardships.”

And it wasn’t until he began working 12-hour shifts as a crane operator at U.S. Steel to support his family while earning a political science degree at Purdue University Northwest that he thought about becoming a lawyer.

“It would give me the tools I needed to cause some effect in areas that I thought to be very important,” he says.

No sooner had he joined the firm in 2015 than acquaintances began sending him immigration clients. “I quickly dove into it,” he says. “And that passion just really took over.”

In his first case, he reunited a young Latino family after proving that the wife, a U.S. citizen, was undergoing extreme hardship. Estrada secured an I-601A provisional waiver that lessened the time the undocumented husband was forced to spend away from his family while undergoing the green card process in Mexico. “They’re here, and had two more babies afterward, which is rewarding,” Estrada says.

He now spends half his time on immigration issues, a quarter on regional municipal litigation and a quarter on civil litigation at the state and federal level. His immigration clients, who include survivors of human trafficking and other traumatic events, hail from as far as England, Africa, India, China, Serbia and Latin America.

In 2017, he took on a complex case for three sisters, ages 7, 9 and 11, who had fled Guatemala on their own and been placed in removal proceedings by the U.S. Department of Homeland Security. During the guardianship hearing, Estrada showed that the girls could not safely return to their home country, and he later obtained Special Immigrant Juvenile classification for all three. Their visa approvals are pending. “It’s a long wait for these things, but it was a great result,” he says.

To avoid sharing sensitive details, Estrada speaks in generalities about what might have happened to them if they hadn’t escaped. “Guatemala has issues, generally, with gangs—whether it’s 18th Street gang or MS-13—that control a lot of areas without any ability or maybe motivation from the government or police to assist their citizens in having a safe place to live. … Females, unfortunately, have it, in my view, terrible. There are a lot of gangs who take ownership of females and there are forced relations, forced marriages. They are treated like gang property.”

In his relatively short time as an attorney, Estrada has become a vocal advocate for immigration rights and reform. He writes newspaper op-eds, handles pro bono DACA cases, and speaks to college audiences, citizen groups and activists. He has also spearheaded local efforts to adopt the nationwide “Welcoming Cities” initiative that protects non-citizen residents.

“I see holes. I see the way [the system] is not working on a daily basis, and I feel a bit of a duty in being a voice, particularly now with the current rhetoric,” he says. “It means weekends. It means nights. But if there’s somebody willing to listen about why things are the way they are, and I have the ability to convey a message of truth, then I do it.”

Estrada, of course, is no stranger to the grind. “I do think I have a leg up on individuals who had the traditional pathway to law school in that I was used to long hours,” he says of his steelworking days. “I was used to being tired. … When I went into the practice of law, I didn’t have to learn that. I knew it.”

In difficult moments, the father of three simply remembers that “the difference between the three Guatemalan girls and my daughters is really a happenstance of being born in one country rather than the other.” 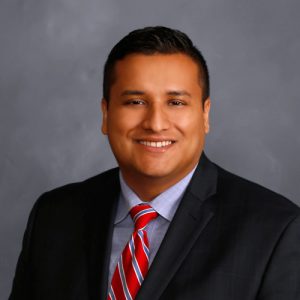 Current State of DACA: Interviewed by the NWI Times

We have offices in both Merrillville and Valparaiso, and are available for client meetings in Chicago. But we also can assist you no matter where you live.